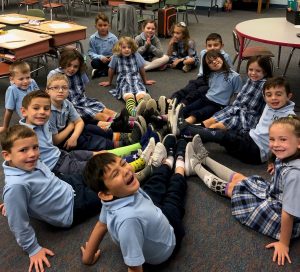 On Monday, January 28, 1957, Christ the King School opened its doors for the first time.  Its name came from its parish affiliation which is still vibrant today even though the mission of the school has changed.

The school included first through sixth grade with a total of 143 students.  Sr. Mary Patrice Messner, SSJ was the first principal and the staff included 3 other Sisters of St. Joseph.  As students advanced, seventh and eighth grades were added.  The first class of eighth graders graduated in June, 1959.  A kindergarten program was added in 1971 and a preschool program was added in 1988.

For many years, Christ the King was a parochial school.  It was one of several such schools in Irondequoit.  When decreasing enrollment and rising costs began to put pressure on all of these schools, several Irondequoit parochial schools were closed and Christ the King became a school within the Monroe County Catholic School System.  Its mission was expanded to include students from those schools which had closed.

Under this restructuring, Christ the King became a Preschool – 6th grade school.  This also meant that Christ the King was the only Diocesan Catholic School open in Irondequoit.  A separate junior high was created for students from the northeast quadrant of Monroe County.  Students at Christ the King were primarily coming from Irondequoit and its City of Rochester neighbors.

Saint Kateri School is a Middle States Accredited School educating Preschool to 5th grade students.
We at SKS strive to continue to develop each child's relationship with God, by promoting a Christ-centered Catholic academic education focused on the Gospel message of Love, Responsibility and Service to others